TV Alhijrah Live Streaming TV Alhijrah Malaysia Interesting Programs, TV Alhijrah Malaysia, the first Islamic digital television station in Malaysia, was set up on September 16, 2006. The station operates at the Islamic Center, Kuala Lumpur. Ideally, TV Alhijrah Malaysia operated by AlHijrah Media Corporation is to realize the operation of a free nationwide broadcast station and publish various television programs through media based on Islamic teachings and universal. TVAlHijrah station was officially opened by Prime Minister, Datuk Seri Najib Tun Razak on 7 December 2010 at the AlHijrah TV Broadcasting Center at the Kuala Lumpur Islamic Center Complex. This station is monitored by Minister in the Prime Minister's Department, Datuk Seri JamilKhir Baharom. Expectations on the part of the government, this station can be a source of knowledge not only to Muslims but to non-Muslims to help them get to know more about Islam. The station is targeted at all ages, for both Islamic and non-Muslim audiences. Main demographics are targeted at young people and audience groups under 40 years

CLICK TO PLAY CHANNEL
One of the TV Alhijrah Malaysia program, which is quite interesting is the Cinta Ilmu program. Every afternoon before the arrival of the call to prayer at Maghrib prayer was announced, the Cinta Ilmu program was broadcast every day. Every two days every week is filled by a prominent cleric in the country. One of them, every Tuesday and Wednesday, is filled by Dato 'Badli Shah Alauddin, Ustadz graduating from M.Sc (Philosophy & Islamic Education) Universiti Malaysia Terengganu, BA (Hons.) Tafsir al-Quran, University al-Azhar, Egypt and Diploma Da'wah, College of Universiti Sultan Zainal Abidin (KUSZA). For the past few weeks, the theme of the material presented was about the biography of the angel. The Ustadz used a book called Inner Biography by Rachmat Ramadhan al-Banjari. 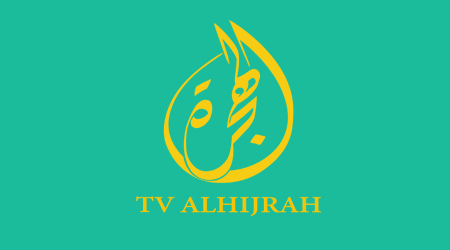 Rachmat Ramadhana al-Banjari is a religious teacher at the Raudhatul Muttaqien Islamic Boarding School, Jl. Cangkringan Km. 4, Babadan, Purwomartani, Kalasan, Sleman, Yogyakarta. He actively provides counseling, psychotherapy, lectures, and Islamic studies routinely every Monday night at Majelis Ta’lim "al-Maghfirah", Seturan, Yogyakarta, as well as several other ta'lim assemblies. His biography and his books can be found on Google. This shows one example that it turns out that the work of a certain nation is able to provide inspiration and sources of information for children of other nations.

Malaysian TV sets that have Islamic programs that provide a considerable controversy in educating and broadening the horizons of Islamic understanding for their citizens are TV1, TV3, TV9, TV Alhijrah Malaysia and ASTRO Oasis. Islamic programs, especially those presented by lectures and dialogues, are very helpful in providing spiritual food for the viewers. The people that Allah wants to get guidance and knowledge will surely tend to like such programs because they feel they need to increase their religious knowledge. To take part in TV1, TV3, TV9 shows, citizens do not need to pay, but to enjoy programs on TV al-Hijrah and ASTRO Oasis must pay each month. While parabola is still banned in the country, except with special permission and not easy, so that it is only able to be used by very limited circles.
Watch Malaysian TV channels TV Alhijrah Live Streaming